Immediately after Super Storm Sandy, LKMA prepared damage assessment reports for the Town of Brookhaven’s Highway Department at the Friendship Drive Road ending in Rocky Point and at the end of Gully Landing Road in Miller Place.  The work included working closely with the Town’s Department of Public Safety and consultants (AIDRC) working for the Federal government (FEMA).  Our office supported the scope of work that was prepared to obtain funding for each shoreline stabilization project.  LKMA secured all environmental permits needed to install steel sheet piling and an armor stone revetment along the heavily eroded site.  The projects included stormwater management and treatment.  Both projects were completed in 2017. 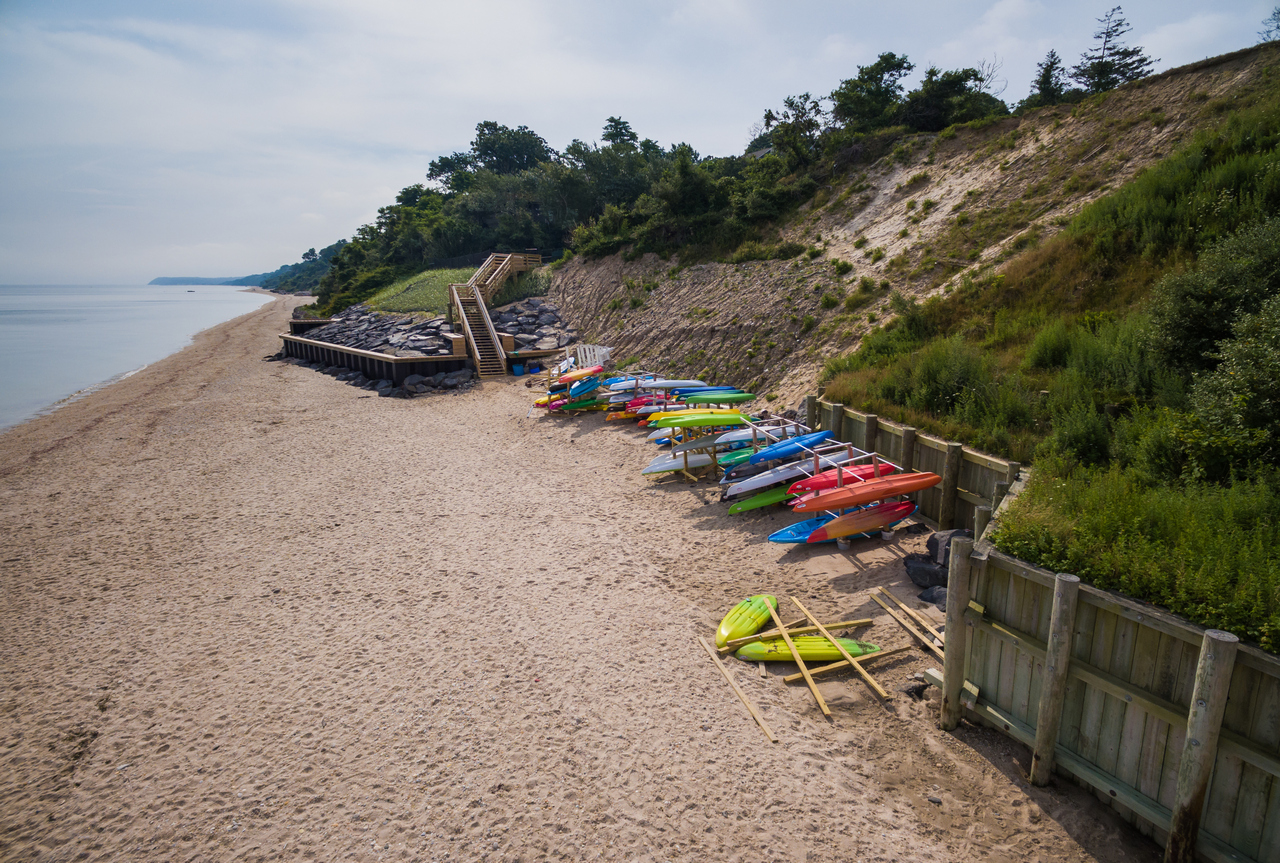 LKMA prepared a Technical Design Report and Design Plans to address a serious outfall condition on a bluff overlooking the Long Island Sound.  As a result of the existing bulkhead failure, the existing bluff was eroded and the Town owned stormwater outfall pipe was undermined. If left untreated, heavy rains would have continued to erode the existing bluff and directly discharge untreated runoff into the Sound. The scope of the project included the design of:  a new drainage system with a stormwater treatment system; replenishment of stabilized fill on the bluff; navy style bulkhead; gabion retaining wall; beach grass plantings; fencing; guiderail; asphalt pavement and concrete curbing.  LKMA provided construction inspection and administration services on the project. 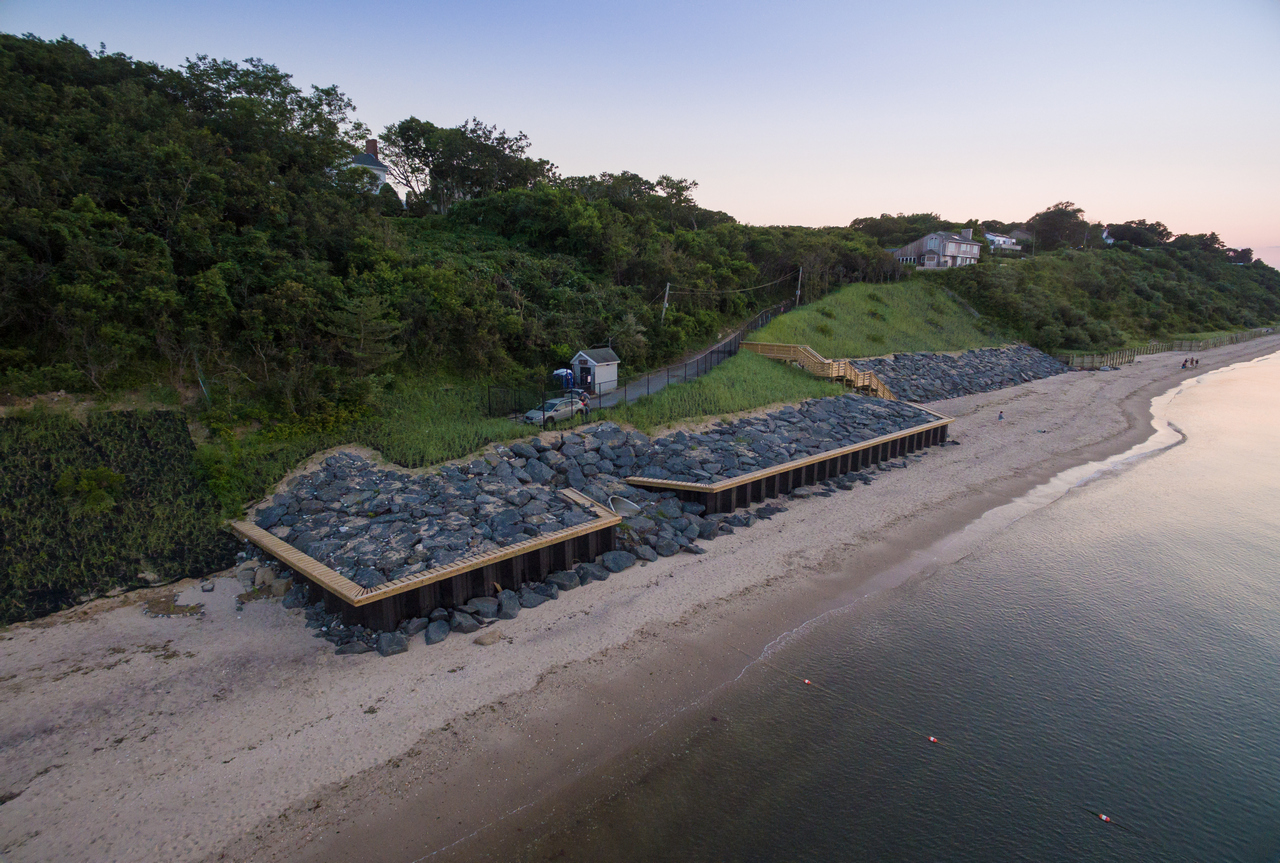 This project entails the restoration of Broadway due to damage from Superstorm Sandy. The site is located at the north end of Broadway in Rocky Point on the Long Island Sound.

The existing antiquated concrete beach access stairway was undermined due to wave action. This stairway was removed and disposed of.

Since the concrete beach access stairway acts as a drainage channel during rainfall events, a drainage system had to be installed. The proposed system will capture stormwater in the upland parking area, treat it, and discharge it through the steel sheeting onto heavy armor stone. Upland of the outfall pipe, located in the parking lot will be a downstream defender stormwater treatment device which was designed to meet the water quality flow rate. The downstream defender uses hydrodynamic separation to help remove total suspended solids, floatable trash, and petroleum from stormwater runoff during low-intensity storm events. In addition, a manhole with a weir was installed to allow heavier flows to bypass the system.

The timber beach access stairway located to the east at Broadway Beach was destroyed by the storm. The stairway was undermined and is now unstable, and hanging due to a failure of the slope below. The stairway was completely reconstructed with pressure treated timber. 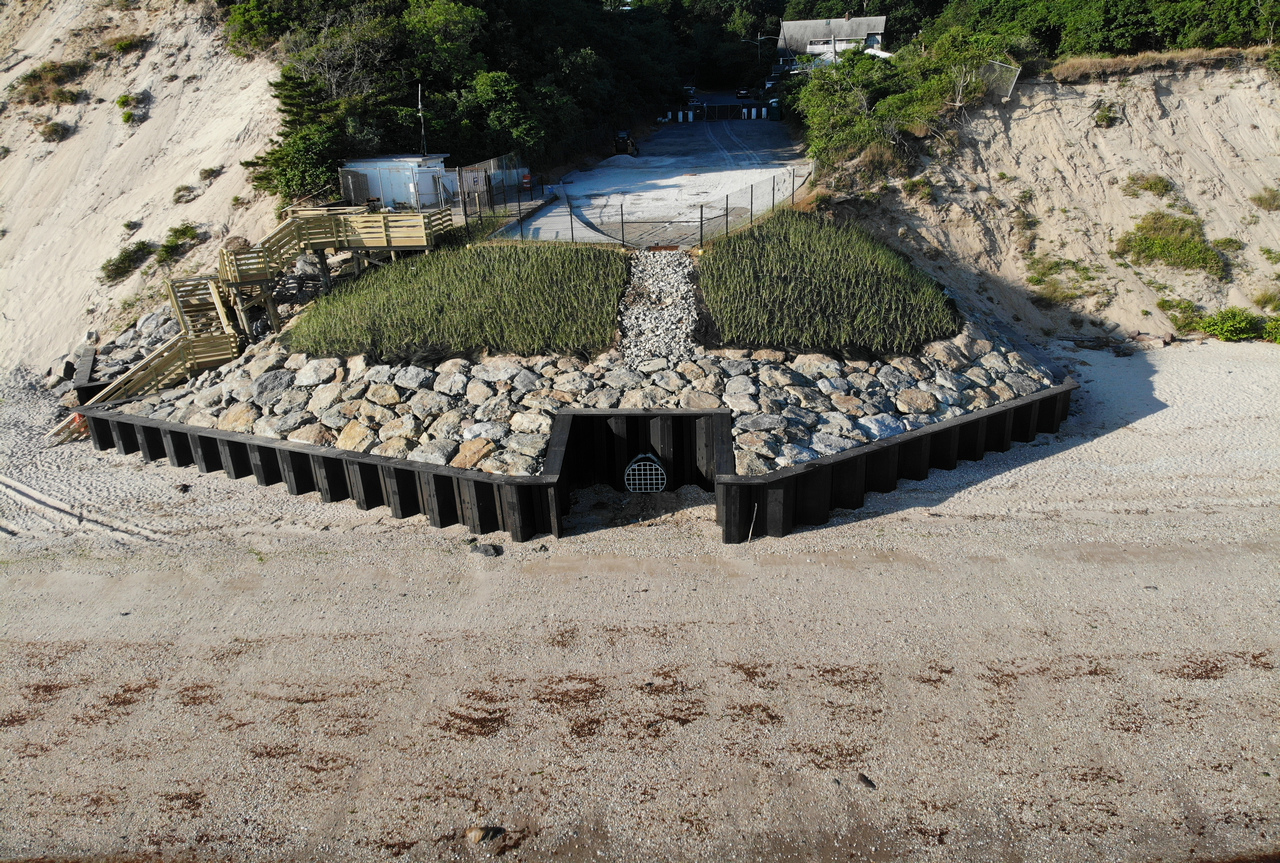 This project entails the removal and disposal of the road ending bulkhead remains and debris at South Ocean Avenue. The site is located in Bayport in the Town of Islip.

The road ending Bulkhead at South Ocean Avenue was destroyed and needed removing. Approximately 36 linear feet of the existing timber bulkhead was proposed for removal and legally disposed of at an approved upland waste facility. The proposed installation was a 37 feet long and 15 feet wide stone revetment. The revetment consisted of two layers of heavy armor stone with W50= 1,000 Lbs. (92 CY) over a 1 foot layer of stone bedding with W50= 100 Lbs. (32 CY). The existing bedding stone was underlain with geotextile filter fabric.

Existing soil that was excavated in order to install the stone was used as fill behind the revetment in the upper areas. Any excess soil was removed and legally disposed of. The bottom of the revetment was installed at existing ground elevation 1.50 NAVD88 and go up at a 1:2 slope until elevation 6.80 NAVD88 is reached. The north area of the revetment was be stabilized with top soil and hydroseed. 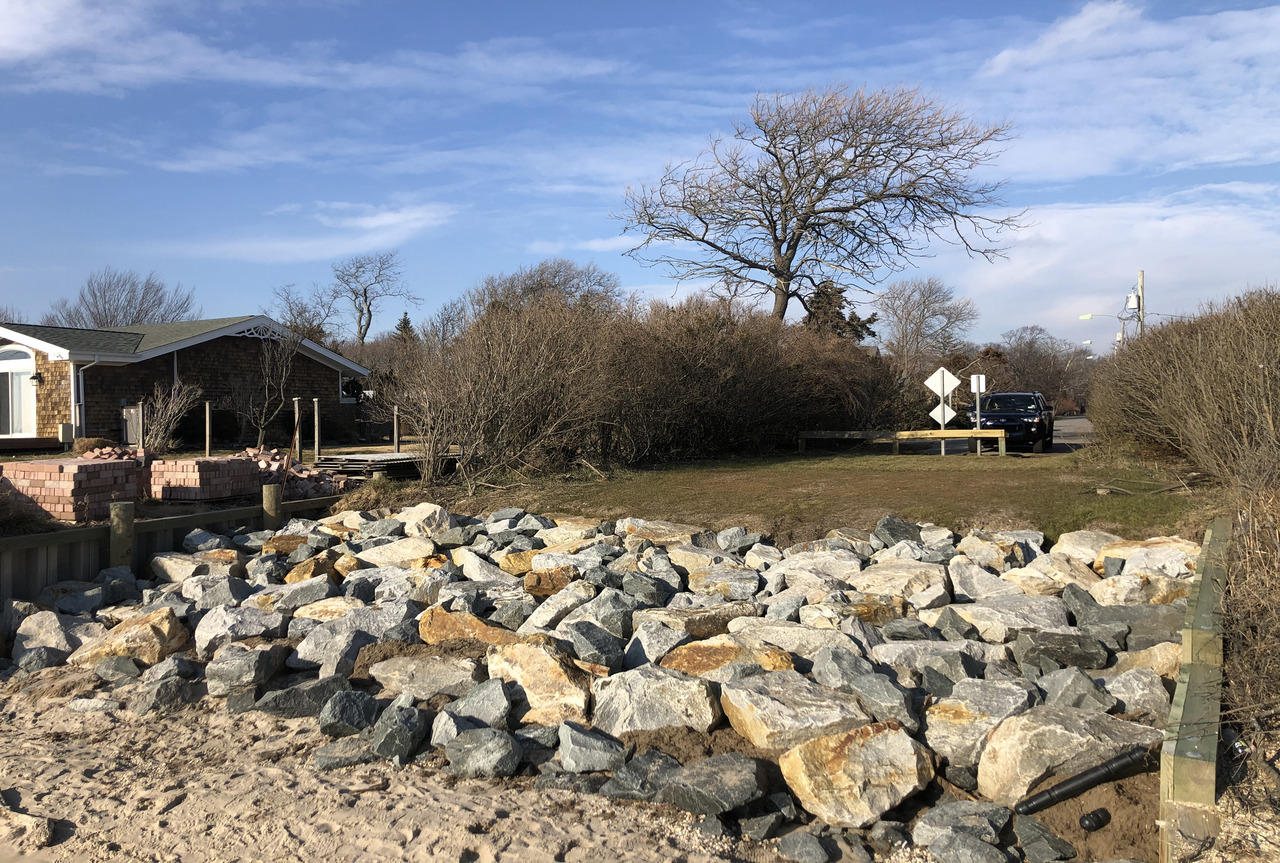 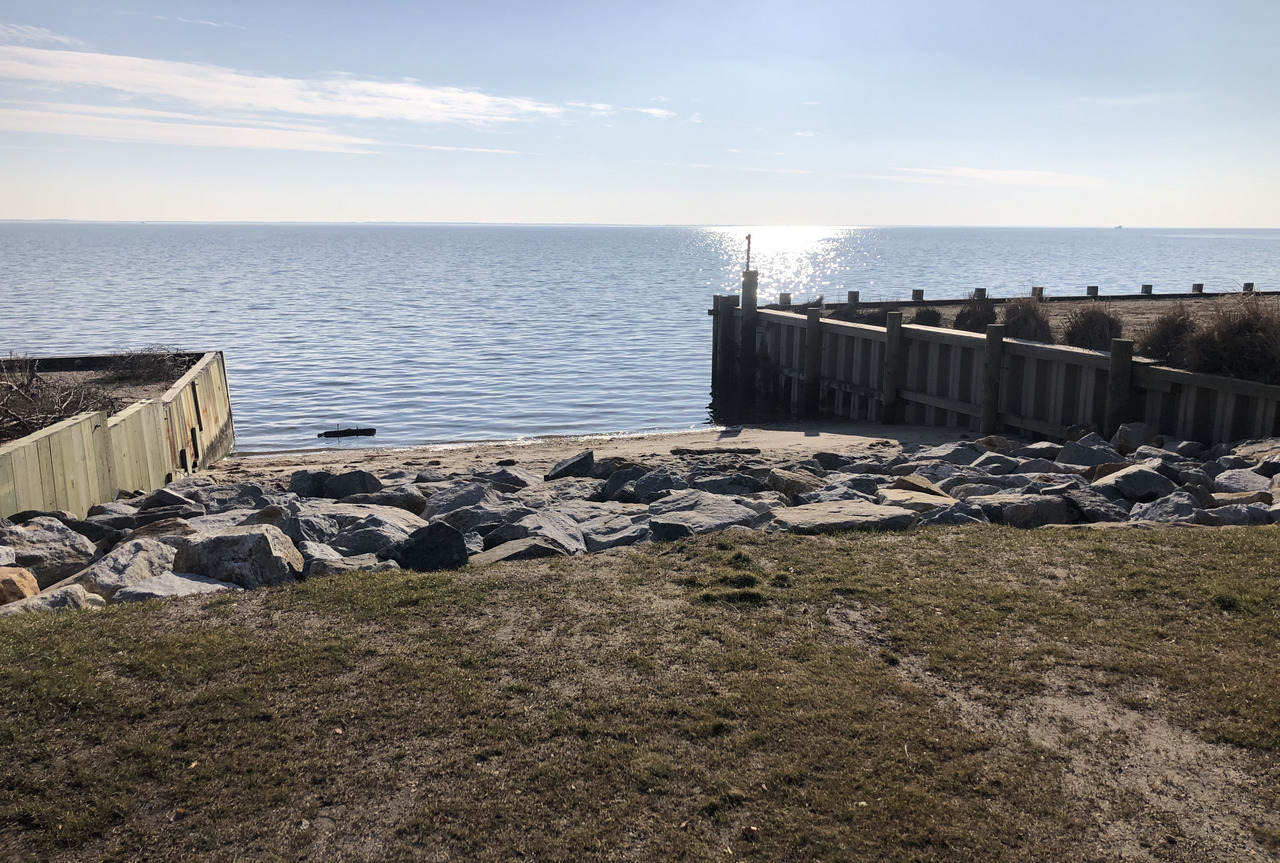